ORDER ONLINE OR CALL US ON +61 (0)7 4059 2300
Open panel
Your browser is not supported for the Live Clock Timer, please visit the Support Center for support.
Return to previous page
View cart “WATER DREAMING” has been added to your cart.
Sale 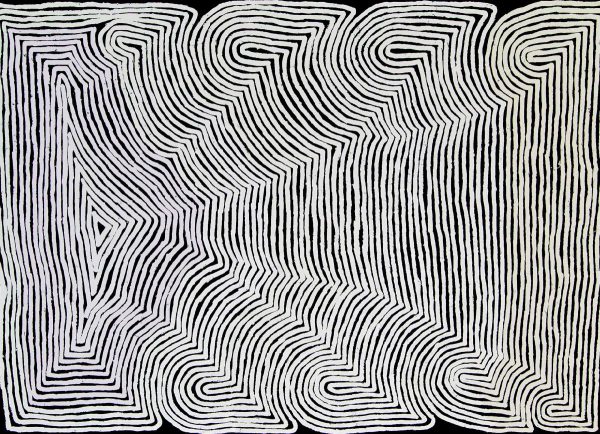 Ronnie is an initiated Pintupi man born at Muyinnga approx 100 klms west of the Kintore Range in Western Australia. His family departed their traditional homelands for Haasts Bluff (Ikuntji) south west of Papunya where they settled. Ronnie and his younger brother had gone to Yuendemu near the Tanami Desert but reunited with the family at Papunya where he was one of the youngest artists at the very beginning of the Western Desert Aboriginal art movement in the early 1970s under the guidance of Geoffrey Bardon. Ronnie was a founding member of the now internationally famous Papunya Tula Artists.
This painting is a superb example of his influence as one of Papunya Tula’s major artists and is a major advancement upon his already acknowledged “pioneering, bold, scaled-up and linear style” (a) from the 1990’s that gained international attention. Its origins lie in dot painting that involves the repetition of a loaded brush pulled linearly on the canvas to form his desired motifs, in this case geometric forms and shapes that move and swirl across the canvas – clearly evoking both the surface and subterranean water impacts on landforms and bringing renewal of life in the desert.
Ronnie’s use of colour in “Water Dreaming” is extraordinarily subtle – in great contrast to “Tingari Cycle” ref PGPT031 – by compelling the eye in an endless process of discovery that evokes the ‘Creation’ motivations behind both “Water Dreaming” the painting and the sacred Creation subject matter behind it. 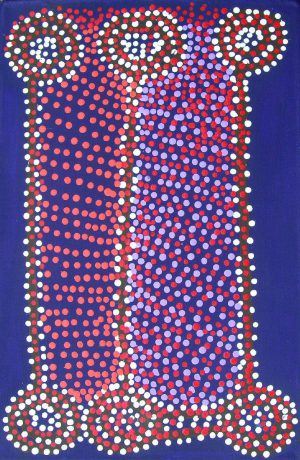 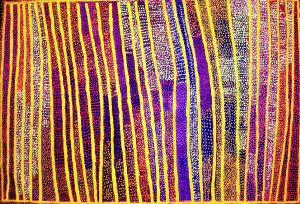