Shorty Jangala Robertson was born around 1930 near Jila (Chilla) Well west of Yuendumu. Like most Aboriginal people of the western Desert at this time, Shorty and his family lived as nomads, travelling the desert country to find food and water. His very early life has memories of his clan telling stories of the Coniston Massacre and also killings at Wantaparri.

After his father died, me moved with his mother to Mt. Doreen Sataion and eventually to Yuendumu. During World War 11 the people of Yuendumu were mover to Lajamanu. He was separated from his mother but she found him and took him back to Chill Well. After the 1967 Referendum giving citizenship to Aboriginal people for the first time, he moved back to Yuendumu.

He worked a number of jobs through his working life but was never involved with the famous Western Desert painting movement that had started in 1971.

He finally as an old man started painting and he spontaneity and freshness of his canvases immediately popular in the art world. Shorty passed away in 2014. 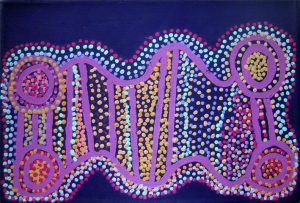