Makinti Napanangka was born near Lake MacDonald around 1930. In the early 40’s her family walked into the Haasts Bluff Mission  about 250km west of Alice Springs, before Papunya was established.

She participateed in the Haasts Bluff Kintore Women’s project in ’94 which was the commencement of Pintupi women’s involvement in the Aboriginal Western Desert art movement. Prior to that they had only collaborated in their husbands paintings.

She joined Papunya Tula Artists in 1996 and quickly became one of their most important artists featuring in the landmark exhibition ‘Papunya Tula: Genesis and Genius’

Her main subject of painting was Two Ancestral Women’ which features the scratchy lines indicating hair-string skirts women wear for ceremony and the swirling rhythms suggestive of women’s dance. In some painting she uses small circles which suggest the eastern Quoll which is from her custodial country. 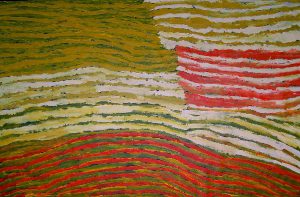