ORDER ONLINE OR CALL US ON +61 (0)7 4059 2300
Open panel
Your browser is not supported for the Live Clock Timer, please visit the Support Center for support.
Return to previous page 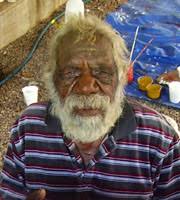 This is a very significant artwork by Dinny – one among 20 similarly executed ‘ground paintings’ created expressly for his one man show at Annandale Galleries in Sydney in 2005. Some of these works were significantly larger than this artwork indicating the significant importance of the exhibition in the history of the contemporary Aboriginal art movement.
Ground paintings are the precursors of contemporary Aboriginal paintings on canvas/linen having been central to sacred ceremonies conducted over at least 50,000 years across the Australian continent, including Tasmania and the Tiwi Islands.
These ceremonies are conducted to this day – but on a much lesser scale – in honour of the ‘Dreamtime’ characters associated with Creation of the artists’ totem/s to which the artist is spiritually and directly connected in a perpetual relationship. In this instance, the subject is Bush Onion Dreaming – where the word Dreaming refers to the Creation of the totemic subject matter with which the artist is specially connected. Ground, or sand paintings as they are also known are not as common as in pre-colonial days and consequentally, these magnificent Walumu works provide a unique and priveleged opportunity to share the artist’s sacred heritage.
The word ‘Walumu’ is the name of a flower from an ancient desert plant that flowers at the time of important ceremonies in and adjoining central Australia. The flowers are collected and mixed with other media to form shapes that are then laid out on the sand at specific ceremonial places together with other natural media – feathers, sacred shapes formed on the ground/sand mixed with ochres, clay and charcoal plus woven shapes in bark, human hair and animal fur. 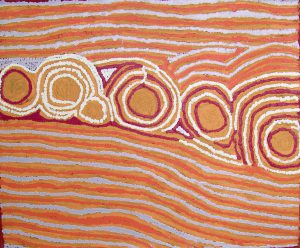 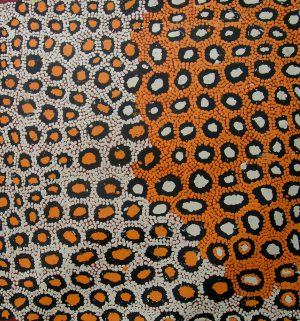