Born at Buffalo Hole, in 1949 in the East Kimberley region of Western Australia, on Texas Downs cattle station, or Joalga, as she knows it, Aboriginal artist Nancy Nodea grew up in the nursery of ochre painters such as Queenie McKenzie, Hector Jandanay and George Mung Mung. Afflicted with leprosy from a relatively young age, she spent many years at the leprosarium near Derby, where, among other pursuits she took lessons in the violin and piano.

Nancy moved to the nearby Warmun/Turkey Creek Community some years ago where she lives today with her children and grandchildren. She has a brother, Churchill Cann who is an accomplished artist, and although she was always interested in art, didn’t being painting until 1996, when she attended the Art Centre at Warmun. Here she was reunited with willing tutors Queenie, Hector and also Rover Thomas, Freddie Timms and Jack Britten. 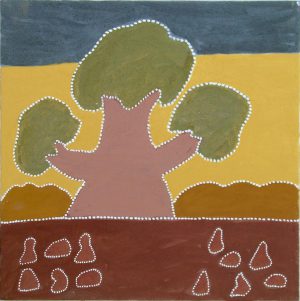