Johnny Yungut is one of the most acclaimed Aboriginal artists from the Papunya Tula Artists, the first art centre formed in 1971.

Johnny was born around 1930 near Kiwirrkurra. In 1957 he met anthropologist Donald Thompson and consequently features in Thompson’s book ‘Bindibu Country’ about the last documented untouched desert people.

He started painting with Papunya Tula around ’78, painting Tingari Cycle stories. His paintings depicted Dreamings of waterholes at sacred locations such as Kampurarrnga, Kalilpilpa and Ilpilli, where he was a traditional owner. His canvases were painted often with closely contrasting colors creating a subtle labyrinth.

His brother was Donkeyman Lee the distinguished artist from Balgo. Johnny passed away in 2001. 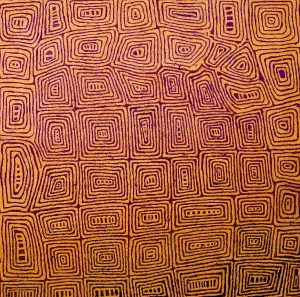